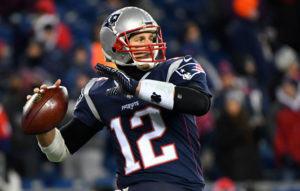 It’s not like we didn’t already realize it, but it’s worth the reminder that one year can change everything in the NFL. No matter who wins in Philadelphia on Sunday, the NFC for the third year in a row will be represented in the Super Bowl by a team that was .500 or below the season before. In the AFC, Jacksonville is merely trying to become the first team to ever make the Super Bowl after winning as few as three games the previous year.

Championship Sunday didn’t give us the predictable once again, and that’s the way we like it. New England may be anything but new as a potential Super Bowl qualifier, but the Eagles and Vikings and Jaguars have never earned a Lombardi trophy, and Jacksonville hasn’t even made the game in its 23-season history. All that novelty should make for great drama.

The preliminaries are now out of the way this postseason. We’re down to just three games left to settle the issue. Here’s hoping the best is yet to come.

The mystery surrounding QB Tom Brady’s mid-week throwing hand injury certainly adds an element of uncertainty to the Patriots’ seventh consecutive AFC title game appearance, and only boosts Jacksonville’s chances of making this a competitive, four-quarter game. If it’s a jammed or dislocated thumb, and Brady can’t grip the ball as he normally would, his accuracy could easily suffer. I was of the mindset the Jaguars are a tough matchup for New England to begin with, given their speed and athleticism at each level of the defense, combined with their ability to pressure the quarterback and disrupt a passer’s timing. Yes, Jacksonville gave up 42 points to Pittsburgh last week, but it took some ridiculous Steelers touchdown catches and throws to manage that, and it may have been the best six-touchdown defensive effort I’ve ever seen. The Patriots generally wait for their opponents to make costly mistakes and then capitalize, using their consistent execution and playoff pedigree to demoralize a postseason novice like the Jaguars. But I don’t think this proud and loud Jacksonville club is going to be intimidated easily, and if QB Blake Bortles can stay away from the game-turning miscues, I foresee a one-score game in the fourth quarter. When all is said and done, though, it’ll be New England that eventually finds a way to prevail, earning a remarkable eighth Super Bowl trip of the Belichick-Brady era. Winner: New England.

Both the Eagles and Vikings should feel overwhelmingly fortunate just to have survived last weekend, when they were one play away from likely elimination on their own home field. So which team will seize the second life it was given and make the most of it, putting forth a winning effort that erases the uneven performances on display in the divisional round? Both big-play defenses have the ability to win this game on their own, only underlining how critical it is for both Minnesota and Philadelphia to get clean, efficient quarterbacking that keeps their team in the game and doesn’t commit the key mistake. I’ve got a bit more confidence in QB Case Keenum pulling that off, but then again, when things got tight against the Saints late last week, he started throwing the ball up for grabs and making risky decisions. Obviously his daring worked out in the end, but the Vikings can’t rely on the miracle-finish game plan once again. An early lead would do wonders for the Eagles’ chances, allowing them to call a smart and somewhat conservative game with QB Nick Foles under center, while also keeping what’s sure to be a rabid Philadelphia crowd on the edge of its seat and into every play. But Minnesota feels like it has a little karma on its side with the Super Bowl being played in Minneapolis, and the Vikings overall were the strongest, most consistent team in the NFC this season. I predicted last week’s Saints-Vikings winner would make the Super Bowl, and I’m sticking with that call. It’ll be close, and rather low-scoring, but it’s Minnesota’s moment. Winner: Minnesota.