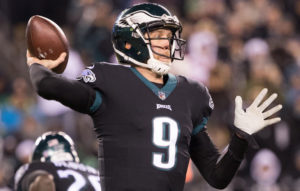 There’s a lot of history on the line next weekend on Championship Sunday, and no matter who the Super Bowl participants wind up being, we’re going to have an interesting matchup on the evening of Feb. 4 in Minneapolis. Here are 10 things to consider about the looming AFC and NFC title games:

2. As has been well-noted, Minnesota is trying to become the first team to ever play a Super Bowl in their home stadium. But these Vikings have already made history, in that no team before them has ever reached the conference championship round in the season its city has played host to the Super Bowl.

3. The Eagles and Vikings have two of the NFL’s most tortured fan bases when it comes to their dearth of titles. The Eagles haven’t won a league championship since beating the Packers in the 1960 NFL title game, a drought currently in its 57th season. They are 0-2 in the Super Bowl and 2-4 in NFC Championship games.

Coincidentally, the Vikings, a 1961 NFL expansion team, are also in their 57th season of existence, and still waiting for their first Super Bowl championship. They are 0-4 in Super Bowl play — tying Buffalo for the worst record — reaching the game four times in an eight-season span of 1969-76. Minnesota is 4-5 in NFC title games, having lost the last five times they made the game. The Vikings only league championship of any sort was the 1969 NFL title, in the fourth year of the Super Bowl era and the last season before the AFL and NFL merged.

4. Minnesota’s 41 years between Super Bowl berths is the third longest current such streak in league annals. It’s topped only by Kansas City, which hasn’t been in the game since the 1969 season, and the Jets, who haven’t made it back since 1968. But at least the Chiefs and Jets won Super Bowl rings for their trouble.

5. The past eight AFC/NFC title games have been won by the home team, which obviously bodes well for Philadelphia and New England, the top seeds. The last time the road team won on Championship Sunday came in the 2012 season, when both San Francisco and Baltimore (coached by the Brothers Harbaugh) prevailed and met in Super Bowl XLVII in New Orleans.

6. Jacksonville made the AFC Championship game twice in its first five years of existence, last going in the 1999 season, which was almost the entire Patriots dynasty ago. As the No. 1 seed, the Jaguars were upset at home in that game by Tennessee, 33-14, failing to fully capitalize on a franchise-best 14-2 season.

Four days after that AFC title game in late January 2000, Patriots owner Robert Kraft hired Bill Belichick away from the Jets as his head coach, and the rest is history. Later that spring, New England drafted Tom Brady in the sixth round, and the Patriots have virtually owned the AFC ever since.

While the Jaguars haven’t been back to this level of the postseason since, the Patriots have made it their annual January excursion, qualifying for the AFC title game 12 times in the past 17 seasons. They are 7-4 in those games entering Sunday’s matchup, including an NFL record seven consecutive championship game appearances. There are 10 NFL teams that haven’t played in even one conference final in that span.
And how this for a mind-boggling stat? The longest New England has gone without making the AFC title game in the Belichick/Brady era is a three-year streak from 2008-2010, and Brady missed almost all of 2008 with a knee injury.

And yet here are the Jaguars, preparing to take on the vaunted Patriots, who just logged their 17th consecutive winning season, and 15th in a row with at least 10 wins. You can very nearly flip Jacksonville’s 22-74 regular season mark from 2011-16 and get New England’s record in those same six years: 75-21 (.781).

But all that matters now is that No. 3-seeded Jacksonville is 12-6 this season and will go into Gillette Stadium to face the 14-3 top-seeded Patriots with a world of confidence after Sunday’s 45-42 shootout win in Pittsburgh. The Jaguars’ 1-10 career record against New England feels like ancient history at the moment.

In the preseason, if you had the Vikings and Eagles making it this far, it would have been with Sam Bradford and Carson Wentz at quarterback. Instead it’ll wind up being a matchup of Case Keenum and Nick Foles, the two former 2015 Rams part-time starters on that 7-9 team in its final dismal season in St. Louis.

9. Making this Minnesota-Philadelphia saga even more interesting is that Bradford and Foles were once traded for each other, when the Eagles shipped Foles to St. Louis in exchange for Bradford and picks in March 2015. Foles didn’t last long with the Rams and Bradford didn’t last long with the Eagles, and now Bradford will back up Keenum as he takes on Philly and Foles. Small world, this NFL.

10. We have three of the top four seeds advancing to the conference finals, which gives us a pretty good chance of continuing the recent trend of the Super Bowl featuring nothing but No. 1 and No. 2 seeds for a fifth year in a row. It’s No. 1 Philadelphia versus No. 2 Minnesota (both 14-3) in the NFC, with No. 1 New England (also 14-3) hosting in the AFC.

But then there’s No. 3 Jacksonville. The last time a No. 3 seed in either conference made the Super Bowl was back in 2006, when the Colts and Peyton Manning won it all, beating the Bears in South Florida. Since then, the No. 3 seed in the AFC has been anything but a launching pad for Super Bowl dreams.
The only No. 3 seeds in that span to even make the AFC title game were the 2016 Steelers and the 2007 Chargers, and both lost — don’t tell the Jaguars — at New England.