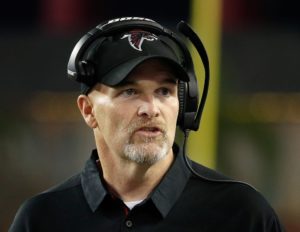 It’s that time of the NFL season when one decision can determine whether a team makes the playoffs or just misses the cut. The Buccaneers (4-9) tried their best to inject some respectability into their season, while the Falcons (8-5) needed to win to stay in position for a playoff spot. Falcons Head Coach Dan Quinn was once again right in the middle of a key situational call that put the Falcons playoffs hopes on the line.

Atlanta was ahead 27-24 and faced a 3rd & 9 from their own 40-yard line with 2:00 minutes left in the game. The Buccaneers had used all their timeouts, while the Falcons had all three – a first down here would effectively end the game. The Falcons had attempted two run plays on first and second down for a total gain of one yard. Falcon playoff hopes rode on the conversion of this 3rd down. At this juncture, Quinn had two choices:

1) Run the ball. It is unlikely to get a first down, considering the last two run plays didn’t get much, but it will keep the clock running and eliminate the chance of an interception. If they get the first down, great. If they don’t, they punt and play defense; the Buccaneers would have about 60 seconds to drive for game-tying FG.

2) Try to complete a short pass, even though a first down is not guaranteed. Although it risks stopping the clock or a potential interception, this choice gives QB Matt Ryan more options. If Ryan finds a receiver open for nine or more yards…game over. If Ryan cannot find anyone, he doesn’t have to throw it. Both options keep the clock moving.

Quinn chose option 2.  Ryan didn’t see anything he liked, and he took a sack.  The clock continued to run, and the Buccaneers were given the ball at their own 29-yard line with a minute left. And even though Bucs QB Jameis Winston led a good drive toward a game-tying FG, the Bucs could have used a few more seconds to run one more play to move the field goal attempt just a bit closer (it also didn’t help that an official spotting the ball slipped, and a few seconds were burned when he had to regain his balance).  But without a precious few additional seconds that perhaps an earlier Falcons incompletion might have provided, the Bucs were forced to attempt a FG on the outer bounds of K Patrick Murray’s range.  The attempt missed, keeping the Falcons in the playoff hunt.

This 3rd & 9 call wasn’t an easy one to make for a head coach.  You know if you can convert, you ice the game – but you probably have to pass to do it.  In electing to pass, the one thing that absolutely could not happen was for Ryan to throw an incomplete pass, and since he didn’t, we speculate either he was told to take a sack, or he was trusted to take the sack.  Either way, it’s just another close judgment call every head coach has to make under pressure, and the better answer isn’t always immediately clear.

And that is this week’s Situational Call of the Week.