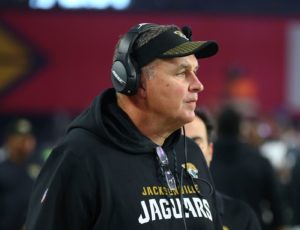 For the second week in a row, the Situational Call of the Week cost a team the game. The Jacksonville Jaguars took hold of the AFC South after the Tennessee Titans lost to the Pittsburgh Steelers the week before. The Titans won a key game against the Colts on Sunday, all Jacksonville had to do was not lose. Instead, Jaguars Head Coach Doug Marrone “got too greedy” as he put it in his play calling near the end of regulation.

On paper it wasn’t a challenging win for Jacksonville, but Arizona came to play. They found success on offense with quick inside passes, and on defense by pressuring QB Blake Bortles, shutting down the rushing attack, and matching WR Marqise Lee with CB Patrick Peterson. This game plan put the Cardinals up 13-3 at half.

Marrone’s aggressiveness started with 7:30 left in the 3rd quarter at the Cardinals 1-yard line. On a 4th and Goal and trailing by 13, the Jaguars decided to go for it and they converted for a touchdown. This made it a six-point game. Jacksonville would score another touchdown on a 10-yard fumble return to take its first lead in the game. The Cardinals came right back and scored a TD and successfully converted a 2-point attempt. Jacksonville scored the game-tying TD after a 68-yard kickoff return gave them a short field to work with.

After securing a first down in Cardinals territory on a 16-yard pass, all the Jaguars had to do was run the clock out and hopefully gain more yards to try a FG. Even if the Jaguars couldn’t get into FG range on the ground, they’d at least pin the Cardinals deep with barely any time left and likely send the game into overtime. But Marrone “got greedy.”

T.J. Yeldon rushed for two yards on first down, but the Jaguars passed on both 2nd and 3rd down. The 3rd down pass came on a 3rd and 6 with 2:47 left in the game on the Arizona 38. Blake Bortles rolled out to find WR Marquise Lee but was intercepted and gave the Cardinals the ball at their own 40-yard line with more than two minutes. Ultimately, the Cardinals were able to get into K Phil Dawson’s range and won the game off his boot.

In our view and Marrone’s hindsight, it wasn’t the best call to attempt another pass play, although it wasn’t wise of Bortles to try and fit the pass into a tight window. Looking at the game as a whole though, Lee was shut down by the Cardinals secondary (1 reception, 13 yards). So targeting him on a crucial pass play with the game on the line wasn’t the best choice. We don’t know if Jacksonville would’ve won the game either by kicking a FG or taking it to overtime. What we do know is that they didn’t win because of unnecessary aggressive play calling. Marrone’s decision to pass cost the Jaguars a chance to sit atop the AFC South alone, and that is why it is this week’s Situational Call.