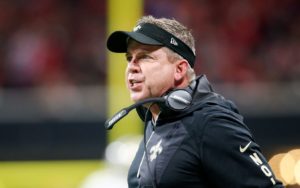 The showdown in the NFC South between the New Orleans Saints (9-3) and Atlanta Falcons (7-5) was a perfect demonstration of how what may be going in the mind of a coach can affect the game on the field. Not only was it an entertaining game, but it was packed full of chin-stroking moments for both coaches, especially in the final two minutes.

The game had it all: lead changes, injuries to key players, interceptions, and great plays. However, fast forward to the fourth quarter and there were three big calls, two by Payton and one by Quinn, with Payton’s second being this week’s Situational Call.

The second call came from Dan Quinn. Trailing 20-17, with 1:55 left and all three timeouts for both teams, the Saints committed a holding penalty on a 3rd and inches from the Atlanta 24. Quinn had a choice to accept the penalty and have the Saints attempt a 3rd and 11 from the 34 or 4th and inches from the 24. Quinn decided to decline the penalty banking on Sean Payton electing to kick the FG. Quinn guessed wrong, and the Saints snuck for a first down.

If Quinn was gambling on Payton playing it safe and opting for a FG, that probably was not a prudent calculation. All year long, Payton has stayed aggressive with his decision-making in game-turning spots (at Green Bay, at home last week vs Carolina, etc.).

If he pushed the Saints back to the Atlanta 34 and a 3rd & 11, it’d be a low percentage down for the Saints. On top of that, the Saints had been stopped on their three drives prior to this one by the Falcons defense, Kamara was out, Ingram was playing hurt, and WR Ted Ginn had earlier taken a hard shot to the ribs. Thus, given how the Falcons had been playing defensively and the Saints’ physical condition, 3rd and 11 was a very favorable down for the Falcons

If Quinn would have accepted the penalty, and even if the Saints make a tying FG, the Falcons probably would have had about 90 seconds and 2-3 time outs left to try and win the game. But by declining the penalty, we feel Quinn put the Falcons in a more vulnerable position by giving Sean Payton more options.

Dan Quinn’s decision to decline the penalty would have been this week’s Situational Call if Drew Brees hadn’t thrown the game-ending interception. The Saints trailed 20-17, and faced a 2nd & 10 at the Atlanta 12, with 1:30 left in the 4th, and one timeout remaining and two for Atlanta. In this scenario, the Saints had a game tying FG attempt from 29 yards secured, and two or more downs potentially to win the game outright. The play call was a play-pass to TE Josh Hill in the endzone, with a check down available to RB Mark Ingram. The pass was intercepted, and the play effectively ended the game.

Payton could have elected to run the ball with an injured Ingram and force Atlanta to burn its timeout, or entrust the game to future Hall of Fame QB Drew Brees. Payton gave the ball to the face of the franchise but Brees didn’t execute for once. Was it prudent to put the game in Brees’ hands with such a call? Yes, a player of Brees’ stature has executed in that situation many times before. While we perhaps could say a running play might have been slightly more favorable simply to cause Atlanta to burn its last time out, a 2nd down play like this one gave the Saints a chance to end the game right there.

This is an example of something that we try to make clear here at HCR. A coach can make the correct play call, but a lack of execution can make it seem like the wrong one, or vice versa. In this case, Sean Payton made the reasonable call to try and seal the game, and make it a two-horse race for the NFC South title. It just didn’t play out as planned.