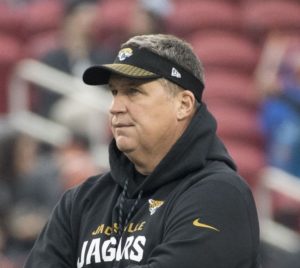 This week’s Situational Call isn’t one specific play call that altered the outcome of the game. Instead, it is the series of play calls Doug Marrone and his staff were able to put together in order to mount a late-stage comeback for the Jacksonville Jaguars against the San Francisco 49ers in Santa Clara. It’s easy to lose grasp of a game late in the season when a playoff berth and division title is wrapped up, but credit to Marrone and the Jaguars for not folding on a cross-country road trip despite being down late in the 4th quarter.

The game didn’t start optimistically for the Jaguars either. They were kept off the scoreboard and could have gone down 17-0 if it weren’t for a blocked extra point that was returned for a touchdown three minutes into the 2nd quarter. That sparked the Jacksonville offense as they scored two touchdowns on their next two drives to send the game tied into halftime.

They jumped ahead 19-16 on the first drive of the 2nd half, but an interception on their next drive would swing the momentum the other direction. A punt and another turnover and now San Francisco led 37-19 with about six minutes left in the game. Marrone may have been tempted to remove starters and get rested for the playoffs. He chose not to; he was going to test just how much a team can do under those circumstances.

Turns out, a team can do a lot, especially when the 49ers got sloppy at trying to close out the game.

The Jaguars drove 85 yards for a quick touchdown, and with a 2 point conversion, they trailed 37-27, with 2:17 left and all three timeouts.

An onside kick recovery led to another quick touchdown, and now they trailed by only 37-33 (the Jaguars missed the extra point kick).

1:55 still remained in the game, and remarkably, the Jaguars still had all three timeouts. The Jaguars just proved that down 18 with under seven minutes is not a distance too far, and why head coaches often bristle at the postgame press conference questions that start with “why didn’t you pull your quarterback as it appeared the game was over?”

He chose the onside kick, which failed this time. The 49ers scored a clinching touchdown, and that was it. But 18 down with less than seven minutes? Doug Marrone proved that it’s still very much a game, and this week’s Situational Call of the Week.