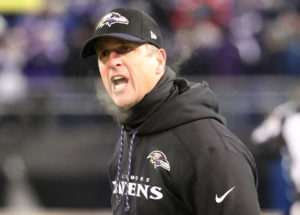 Earlier in the week, Ravens Head Coach John Harbaugh was upset about the kickoff time being pushed back. He was concerned fewer people would show up to the game. Well, it spared a lot of Ravens fans the disappointment of paying to see their team not only lose to a division rival, but a playoff spot in a gut-wrenching manner. Several of our Situational Calls of the Week have come on the last play, or close to it, and this week’s underlines the importance of making judicious decisions until the clock reaches double zero.

The Bills won their game and the Titans punched their way into the postseason. All that was left was for Baltimore to determine the destinies for all three teams. The game started off promising for the Bills, whose fans were watching anxiously for their 17-year playoff drought to end. The Bengals forced the Ravens to punt on all of their first quarter drives. The Ravens offense really wasn’t able to mount any kind of drive in the first half. Their two scores came off a fumble converted for a FG and a big kickoff return to the Cincinnati 6-yard line which they converted into a touchdown.

Things looked great on Baltimore’s first drive of the second half after the Bengals returned an interception to make it 24-10. However, another special teams error gave the Ravens a relatively shorter field, which they scored a touchdown with. Then the momentum shifted towards the Ravens. They scored on their next two possessions to take the lead 27-24.

The score remained 27-24 until Cincinnati got the ball back at their own 10 with 2:43 to play, and one timeout. Keep in mind, since the pick six at the beginning of the second half, the Ravens defense kept the Bengals off the scoreboard for the entire half until now. They had been playing man coverage for most of this drive and the half, which proved to be successful. The Bengals weren’t driving down the field in any way, they were bailed out by a couple of penalties by the Baltimore defense, one of which negated an interception.

On 4th and 12 at the Baltimore 49, with no timeouts left, and less than a minute to go, the Ravens decided to go with a 2 deep zone defense. Bengals QB Andy Dalton found WR Tyler Boyd, who was lined up in the slot, for a 49-yard touchdown to put the Bengals in front 31-27 with 44 seconds left. In one play, the Ravens went from playoff bound to ending their season, sending Buffalo to its first playoff appearance in 17 seasons.

In situations like these, coaches and coordinators weigh the risks of going man or zone defense. Usually, man is too risky to go with as it relies on the secondary’s ability to keep up with receivers and risks giving up an automatic first down on a penalty, which occurred earlier in the drive twice. However, in this situation it might have been a safer call to go with man. It was working for the most part on this drive and in the half. If a penalty is called, that just means Cincinnati has four more tries at finding the endzone with less time remaining. By going zone, it left playmakers like Tyler Boyd and Andy Dalton to find space and ultimately the endzone.