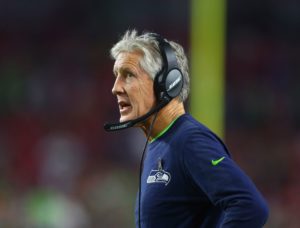 The Seahawks won an offensive shootout against the league’s brightest young star, Texans QB DeShaun Watson. In what may have been the most entertaining game of the season thus far, fans were able to see the amazing skills of Watson, Seahawks QB Russell Wilson, Texans DE Jadeveon Clowney, and Seahawks S Earl Thomas.

But was it great football? One could (rightfully) argue that defensively, it was awful football – a 41-38 score clearly indicates a defensive disaster.

Offensively, it wasn’t much better. That seems a bit counter-intuitive given all the points scored, but from a coaching standpoint, much rested on the athleticism of the players and defensive breakdowns. For example, Seattle simply can’t protect its quarterback. And if you can’t protect your quarterback, you’re really not playing great offensive football. Russell Wilson simply is so gifted that he is able to overcome Seattle’s offensive line struggles pass protecting and run blocking. And then there’s Seattle WR Paul Richardson, whose ability to win 50-50 balls is elite.

So if the Seahawks really didn’t perform that well offensively or defensively – or at least not up to their standards – why is Pete Carroll this week’s Top Dog?

Because Pete Carroll is great at the one thing that every head coach strives for – the ability to create a relentlessly positive culture for his players’ self-belief to blossom.

There may not be anybody better in the entire league.

Carroll constantly works on creating, expanding, and maintaining a “can-do” attitude with everyone in the entire organization. It’s his calling card (on top of being an excellent defensive coach), and he is consistent with it. So when the Seahawks needed to drive the field in barely over a minute with no timeouts, his staff and his players didn’t flinch – they knew they could do it. Carroll has created a culture where self-doubt is eliminated, and that translates into spirited play. Which translates into W’s.