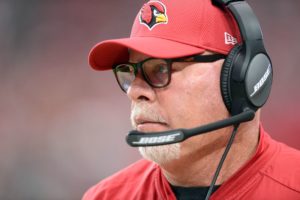 The Cardinals came into this game with a record of 3-4, and if they’re going to do anything this season, a win against the 49ers would be critical.

But whenever you’re playing a winless team, strange things can happen if you’re not careful (see Giants at Broncos earlier this season). So it’s incumbent upon any head coach to work against every head coach’s nemesis: complacency.

Arians was playing down two of his very best players, QB Carson Palmer and RB David Johnson, but every team has that issue, and it’s up to every head coach to simply adjust and do the best they can with whatever they have. And in this game, Arians did just that.

Arians didn’t get cute in this game, which is what we appreciated about his work this week. There were two facts about this game that favored the Cardinals. First, both teams were playing with a backup quarterback, only his wasn’t a rookie playing behind a banged up offensive line. Second, he had just acquired a Hall of Fame caliber running back in Adrian Peterson.

So what did Arians do? He blitzed the heck out of 49ers QB CJ Beathard (who actually hung in there very admirably), and he fed the ball to Peterson for 37 carries, a career-high for him. This was a good example of not overcoaching – which strangely is hard to do in today’s NFL.

Arians walked out of Levi’s Stadium with a 20-10 win, the Cardinals are 4-4, and have a chance to go over .500 with a Thursday night victory at home over the Seahawks. Bruce Arians, HCR’s Top Dog for Week 9.